The production of aboriginal memories on the screen is not an issue that can be fully understood from an individual perspective alone. From the beginning, aboriginal media developed through a dynamic network of society’s various interior and exterior forces, including their own community identities, other communities within the country, as well as politics, economy and media forms. In such a dynamic development, institutions that promote aboriginal media development play an important role in reinforcing and structuring the relation between aboriginal people and the media, while at the same time furthering the diversity and depth of aboriginal images.

The Central Australian Aboriginal Media Association（CAAMA）is located in Alice Springs. Co-founded by two aboriginal people and one white man (or woman?) in 1980, it began with an FM radio station featuring aboriginal rock music, Country and Western music and call-ins. Six aboriginal languages and English were used for discussing local aboriginal issues, and the station became popular among both aboriginal and the white people. In 1984, CAAMA established a department of video production to make a series of programs about current affairs, thus expanding their information transmission services beyond radio broadcasting.

In 1985, the Australian Satellite（AUSSAT）station began operation. The system has been used to transmit television programs, including services for remote communities in Australia. Conscious of commercial satellite channels’ intense impact on aboriginal culture through the infiltration of the dominant social value system, the frontman of CAAMA applied to the Australian government for a license for television broadcasting . In 1988, the first aboriginal commercial television channel in the world, Imparja, was thus established. Imparja attracts a great number of aboriginal viewers and regularly broadcasts programs produced by CAAMA.

Since the late 1980s, CAAMA has accumulated a lot of experience in media production and has produced many documentaries. Many Australian aboriginals regard all mass media （such as the satellite channels） as another destructive invader after the Europeans and their alcohol, and the process of image production has indeed affected the reorganization of both interior and exterior social relations. However, the presence of indigenous screen production marks a powerful reversal of the history of colonial looking relations. Aboriginal media productions post a retort, in various ways, to the state and its power structure which have deprived the indigenous peoples of their rights, subjectivity and citizenship for more than two centuries.

The 2007 Taiwan International Ethnographical Film Festival features three films produced by CAAMA：Yellow Fella, Sunset to Sunrise and Walking Dancing Belonging. The characters in the films reveal the specificities of aboriginal experience through their ways of seeking, memorizing and narrating, as well as their views of the world ; we see an aboriginal／local perspective that departs from that of the dominant society. 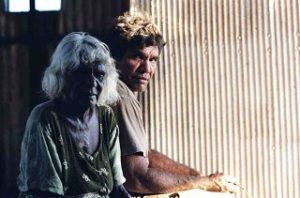 The protagonist of Yellow Fella, Tom, is is half aboriginal and half white. Anxious about his hybrid identity, he is confused and struggles to search for some place where he belongs as a descendant of two different ethnicities. One day, Tom finally makes up his mind to take his family on a trip across the continent of Australia: with his black-skinned mother , in a van loaded with daily necessities, he goes in search of traces of his white father.

As the van travels forward, memory turns backward. We hear Tom ask his black mother about the emotionally complex relationship between his differently-colored parents. Along the road and the arrow of memory, we enter Tom’s world of the past and gradually learn his mother’s story: how she, as a girl, got pregnant while working as a servant on a white people’s ranch.

At the end of the journey, Tom is not successful in finding his father’s grave . His lonely figure fades in the ray of the setting sun. and his mother is saddened by his frustration. The soul of Tom’s story lies in the sense of belonging and sentiments of self-identity and affection in the very core of an individual. Yet, when examined in the larger context of the aboriginal people’s collective experience, Tom’s story is more than personal.

Life of the Aborigines, as Life 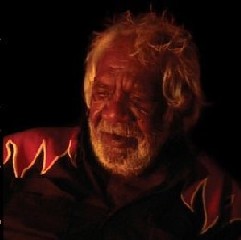 Sunset to Sunrise records in detail the worries of Rupert Max Stuart, an Elder of Arrernte Mat-utjarra, about the decline of Australian aboriginal culture, and his hopes for cultural transmission. The film begins with his teaching two juniors how to cook kangaroos, telling us that the aboriginal culture is transmitted from one generation to the next through such actions.

The Elder consistently emphasizes the importance of passing on one’s cultural heritage. However, aboriginal culture was heavily influenced by the white people’s invasion which put their languages and customs at risk of extinction, leading to a crisis of cultural transmission. The Elder Rupert also emphasizes the importance of language. He thinks the tribesmen should learn their own language well before learning foreign languages（English）, because it is only through one’s own language（thinking） that one can really understand one’s own culture.

Rupert also admonishes the tribesmen against drinking and idling their life away in indolence, since alcohol was introduced by the white people and is not part of traditional aboriginal culture. Alcohol harms not only one’s health but also one’s mind. It might even bring disaster to the descendants: their imitation of white people’s drinking will result in damage to the their future generations. Rupert thinks the tribesmen should lead a diligent life and take good care of themselves, and carry themselves with self respect. They should also take good care of their posterity and establish good role models for them.

The tribal elder’s philosophy of life spreads through the screen; thus the wisdom of this view of life is passed on. In the end, the audience is not only given access to learn about Australian aboriginal culture, but is also inspired by the film’s reflection of life. At this very moment, we see clearly the television media is subtly made use of by the aboriginal people and transformed into an effective instrument for passing on the cultural knowledge of the tribes.

Painting Home in the Colors of the Spirit

In Walking Dancing Belonging, three women share descriptions of their beloved home as a place that one can identify with, a place one can stroll and dance through by means of artistic expression. Phyllis picks pebbles from the riverbed. Peggy observes the grasslands wave in the wind, and Minnie paints the stories she wants to tell her grandchildren.

Phyllis: ’When I walk around our home, I often see many pebbles. The small stones with pretty colors brought by the flood from the riverbed, we call them gerran. It is the same word as money.’

Peggy: ’I use color, line and touches of painting to express my love for place and home. The river, the hills and the caves are all subject matters for my painting. I also try to capture the flood and the grasslands that wave in the wind.

Minnie: ’When I paint, I know my home and the stories about her. I tell stories to my grandchildren. They know the stories. Then they can continue to tell others and can paint according to the stories. Stories tell me something about my home. The stories told by my home inspire my painting. This is how I paint.’

These women’s paintings are strong, detailed and life affirming, with a powerful sense of belonging in their own place. This documentary shows us their art and vibrant culture. Here we see the strength of memory on the screen.

With the help of CAAMA, the life stories of the protagonists of these three films are discovered, explored and celebrated. Tom strolls through a time when fates cross and meet. His search for self leads him through intertwined traces that are ambiguous yet concrete. Rupert, the Elder of his tribe, consistently reminds his people before the camera: live your own life, an aboriginal life. His message is simple, yet unforgettable. The three women in Walking Dancing Belonging, with their stories like paintings and their paintings like stories, experience the aesthetic view of the world in which the aboriginal culture is deeply rooted. These films’ conceptual expressions give us different images of aboriginal lives. The strong will and self-identity of the first peoples of Australia are transmitted through the screen.