City of Memories, The Gangster’s God and I Am in a Hand Puppet Troupe are the three Taiwanese documentaries selected for the New Vision section of the Taiwan International Ethnography Film Festival this year. City of Memories is made from a long-term observation of the elderly people living in an old age home with a focus on their lives and sentiments. The Gangster’s God centers around the gangsters who play the role of Hantan Yeh（寒單爺, a Taiwanese folk deity）, being bombed by firecrackers amid the noise and fire of a ritual procession, which is also a process of self-searching. I Am in a Hand Puppet Troupe describes the joy, bitterness and perseverance of the Ping-Deng Elementary School students as they learn the techniques of traditional Taiwanese glove puppetry. At first glance there seems to be no correlation whatsoever between the three films except that all are made in the last two years and meet the festival’s selection criteria. However, after consideration, we can see that there is indeed some common ground shared by the three works. All of them depict the need, aspiration and frame of mind of people of different ages, and point out issues in Taiwan’s society that demand reflection on the part of the government and the public. Besides, all are accessible and entertaining. The directors do not propose precise answers to the various questions and predicaments presented in the films. But after seeing the films, viewers will think for a while and attempt to find meaning in the people and things around them.

According to the data of Taiwan’s Minister of the Interior, the proportion of the elderly in Taiwan is increasing year by year. At the end of 1990, the elderly represented 6.22% of the population. At the end of 1993, they were 7.10%, reaching the standard of an “aging society” as defined by the World Health Organization. In the first half of 2007, the rate rose further to 10.09%. Although it is a well recognized fact that Taiwan has become a veritable aging society, and a set of policies have been set in place to create facilities for the old, people are still adapting at the mental and affective levels; they struggle with the contradictions between new values and old ones. In City of Memories, the old people living in the private old age home are of both sexes; they are from different provinces, they are talkative and silent, resigned and impatient. Despite the differences in sex, origin and personality, they are similarly lonely and helpless in the face of inevitable separation from a familiar home. They cheer each other up, but sometimes quarrel as well. They look forward to seeing their families or friends, but the people they see most of the time are other elders and their foreign caretakers. In the micro-society of the old age home’s diverse communities, we do not see clashes between people of different parties or origins. It is as if what counts the most for them is their health, and what they wish for is love from family and friends. 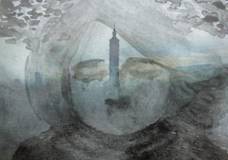 The protagonist of the film, Chang Chi-Chien came from Shanghai. In her youth, her eloquence and versatility, and her talent in singing and dancing made her the lead performer in an artist-worker troupe ,. She married, had children, and was well off. Unexpectedly, when she got old, she was sent to the old age home. She found it hard to adapt to the great change. Her straightforward temper drove her to a final dramatic act. Some elders there have lost their memories; some lost their ability to speak after a traumatic experience, while some are whining non-stop. Some have families who come to see them frequently, whereas the rest have to ask the staff at the home to call their family to see what they’ve been up to. It is hard to imagine the difficult feelings of the elders who have to leave home and stay in a place strange to them, trying to get along with strangers. Yet the greatest test for them lies in the yearning for their families, which is impossible to dispel. City of Memories evokes in us higher hopes for children, government officials, managers of old age homes and even the elderly themselves. We hope that through our effort the elders in Taiwan can live a life of respect and happiness.

With the trends of localization and commercialization, folk festivities around Taiwan are drawing more and more public attention and interest. Major ones such as Donggang’s Burning King Boat（王船祭）Festival, Tachia’s Matsu Pilgrimage（媽祖遶境）and the Firecracker Festival of Yanshui（蜂炮） can attract up to a million local and foreign visitors per year. Others such as the Sky Lantern Festival in Pingsi （放天燈）and the Grappling with the Ghosts Festival in Toucheng（搶孤）are also annual events. These folk events were originally local activities for praying and exorcism. However, being associated with tourism in recent years, they have become country-wide religious and cultural events. After being restored in 1989, the ritual of Bombing Hantan Yeh during the Taidong Lantern Festival has gradually become one of the most noted folk festivities in Taiwan. Set in the context of Taidong’s Bombing Hantan Yeh activities, The Gangster’s God explores the gangsters who compete for the role of Hantan Yeh as part of their quest for self-identity.

The shirtless gangsters stand on the God’s Chariot in red shorts, taking the bursting of firecrackers coming from all over . On the one hand, it is to show courage and to win reputation for their gangs. On the other hand, it is considered a kind of psychotherapy. The gangsters look for redemption for their crimes. Due to the violence of the activity and the fact that the participating group were mostly gangsters, the ceremony was banned between 1983 and 1988. Some say Hantan Yeh, when alive, was also a local bully. After being enlightened by the gods, he repented and asked to be burnt to death as atonement; hence he got the nickname, the Gangster’s God. Perhaps it is this story that makes the gangsters identify with him. Although it is not always easy for gangsters to leave the gang community, they still live with their own sense of morality, which can be a kind of redemption for them. The transformation of social values also influences people’s self esteem. When the tattoo is no longer a mark of gang membership and becomes a symbol of an aesthetic lifestyle, this reality also changes the image of the tattooing “industry”: people always desire the respect of others.

Local cultural education is one of the programs promoted by the Ministry of Education in Taiwan’s elementary, junior and senior high schools, so that folk crafts can take root in the new generation. Thus masters of glove puppetry troupes are beginning to train schoolchildren to work glove puppets while singing the dialogue. In comparison to the other two films, I Am in a Hand Puppet Troupe has a more relaxed feel. Maybe it is because the subjects are schoolchildren. The protagonist, Tu-Deng Yueh-Sheng’s ancestors came from Tibet. She is fascinated by the glove puppetry performance and decides to invest more time in practicing than the other kids do, so that she can catch up. Besides, she insists on staying in the troupe when most of the sixth grade students decide to quit because of their increasingly heavy homework. The children’s insistence on pursuing beauty and excellence is moving –not only grownups, but youth are able to make an admirable effort as well. The film shows the puppetry students, their interaction with the master, the difficulty that the school confronts in directing local education, and the charm of the glove puppet theater. To be able to perform the glove puppetry, the young Tibetan descendant must learn to speak the local Hoklo dialect. In an age when international immigration is becoming more and more common, this probably doesn’t seem so astonishing anymore. The multi-cultural influences are what makes the world so beautiful. The important thing is how to accommodate oneself to a different cultural setting and appreciate what it has to offer. 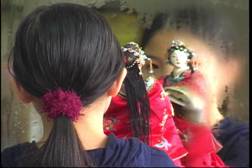 Although the topics of City of Memories and of The Gangster’s God are serious, we can still smell a sense of humor in the directors’ approaches which keeps us from falling asleep. In I Am in a Hand Puppet Troupe, we see the lovely nature of the kids, but also see the pressures and choices they have to make in their life. City of Memories talks about the elderly, The Gangster’s God documents young people, and I Am in a Hand Puppet Troupe focuses on children. Although of different ages, they all pursue their dreams for the future. Children study hard under their parents’ encouragement or pressuring; some find learning interesting, some dull. Entering the real world, the young work hard to make a living and win reputations; some succeed and some don’t. Whether staying in the center finding themselves marginalized, the elderly only hope for their health and for care from others; some are content and some feel forlorn.

In the end, it comes down to what we are searching for. How does one judge success and failure？Who decides what’s happiness and pain？In school textbooks, it’s often said that we should live in a meaningful, life-affirming way. Although we arrive in the world alone and will leave alone, we are coexisting with other individuals in the space and time between. But what is our relationships with other people？Are we soul mates in separate worlds, or just strangers who seem familiar？Friends smiling to one another, or enemies glaring at each other？More importantly, what is our relationship with ourselves？Who is the person we really want to be？I believe the three films will inspire further reflection in the audience.