In addition to its spotlight on the American director Victor Masayesva, (a member of the Hopi Tribe) the 2007 Taiwan International Ethnographic Film Festival’s Director in Focus program will also highlight local talent. We are delighted to introduce Mayaw Biho, a documentary director and member of the Amei Tribe, and three of his films, Children in Heaven, Carry the Paramount of Jade Mountain on My Back, and Dear Rice Wine, You are Defeated.

The director was born and raised in the tribal village of Chihlo, in Hualien, from which he departed in order to attend high school. As a college student in Taipei, Mayaw Biho began directing such movies as ’Spring Sun’ is Our Name, As Life, As Pangcah, Children in Heaven, and Gi-Lahatzu. Upon graduation, he became an independent filmmaker, working on Formosa Aboriginal News Magazine, Our Island for the Public Television Service, and Words of Life on Super Television.

Interested in more than just the recording of copious images of aboriginal life, over the years Mayaw Biho has also worked actively in the cultural movement for the advancement of aboriginal social status. His films highlight contemporary politico-ethnic issues, such as the Taiwanese First Nation’s mission for the reclamation of the original aboriginal names for people and places. In addition to promoting the world’s general awareness of them, Biho attempts to arouse the consciousness of the island’s indigenous peoples themselves, and harness their collective power through his image-performances. In 2000, Mayaw Biho helped organize Taiwan’s first festival of tribal film, the Real Pang-cah Amei Film Festival. Then, in 2005, he was an instrumental player in the “Get Our Real Names Back” movement, which included commercial film productions, the distribution of documentaries, the launch of a website, and the “One Hundred People Reclaim Their Aboriginal Names” political action.

In this so-called pluralistic society, just how many diverse voices do we hear, how many different faces do we see?

Mayaw Biho uses this question as a jumping-off point, endeavoring to then directly pipeline the aboriginal experience to the audience, conveying aboriginal identity and belief systems via portrayals of tribal society, economics, and politics. Mayaw Biho’s “image-movement” explores the political potential of aboriginal self-representation, using new media as a tool for advancing the community’s political hopes. He shows how aborigines are creating a new sense of self, one meant to withstand the flux of greater political authorities, national identities, and social cultures that swarm around them.

Playing House with the Children in Heaven

Every year, the Taipei County Government sends a wrecking crew to demolish the impoverished tribal village that is situated under Sanying Bridge, due to its violation of the Irrigation Management Law. With police protection, excavators and trucks invade the riverbed land, razing the wooden houses and demolishing the entire village, with not even one patch of asphalt spared from their destructive authority. The debris is then hauled away in an efficient and singularly muscular display of governmental administrative power.

Mayaw Biho’s film portrays these events through the eyes of the village’s children. The children are boundlessly creative in their elaboration of fun and play, despite harsh surroundings. (A small inner-tube propped on a half-open door serves as the hoop in their game of basketball.) After their hamlet and homes are destroyed, the children survey the ruins. Rummaging, they gather random boards, a hammer, and some nails, and fabricate for their beloved dolls a new home, which also serves as temporary shelter for the children themselves.

The world, as seen by the children, is presented through black-and-white photos and color film. The still photos offer a sketch of village life while the color film, on the other hand, uses sound and movement to provide a running commentary. The “voices” of the children are silent, expressed through subtitles. Their unspoken narration and internal monologues, actually written by the director, harmonize with the voice of singer Parangalan on the soundtrack. Experienced together, these silent, sung, and narrated voices are very evocative.

After experiencing repeatedly the destruction and rebuilding of their hamlet, the children know that soon they will once more get to “play house,” —with the nation, police, and administrative powers. The lyrics of Parangalan’s song NoNoNo —“not alive but not dead, not real but not fake, not drunk but not sober, am I in heaven?”— express immeasurable frustration and irony. 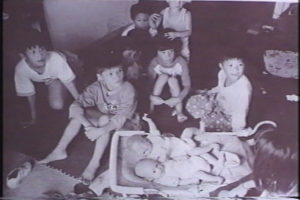 Carry the Paramount of Jade Mountain on My Back

Children today probably know nothing of the story of Yu Yu-jen, let alone that of the bronze statue of him that once graced the summit of Jade Mountain.

In their youth, Wu Sheng-mei and Chuan Kuei-mei, from the Tungpu Bunun, were two outstanding mountain guides who had the arduous job of carrying the Yu Yu-jen statue up the mountainside. Aborigines often served as guides and porters, helping climbers lug burdens through the thin atmosphere of high altitudes. Such strenuous activity eventually took its toll on the guides’ health, the excessive burden often resulting in irreparable leg damage.

Wu and Chuan worked together with the China Youth Corps during the 1970’s. In 1978, they were given the responsibility of carrying the bronze statue of Yu Yu-jen to the top of Jade Mountain. The statue, itself, weighing over 90 kilograms, was packed in a wooden crate which brought the total weight of their load to about 115 kilograms. The two also took turns carrying the statue’s base, which was made of concrete .

Ensconced on the mountaintop, the statue of Yu Yu-jen served as a kind of political totem, in line with the country’s Chinese identity and the political ideology of the time. With the lifting of martial law, Taiwanese nationalist feelings escalated and many people were eager to free themselves of everything “Chinese”. During that period vandals removed the head of the statue and, not long after, the rest of it, base and all, was shattered and cast into the valley from its mountaintop post.

When Wu and Chuan learned that the statue which they had so arduously labored to usher homeward had been destroyed, they were saddened and perplexed. Although not clear in their minds about what Yu Yu-jen represented, they knew that the newly aroused Taiwanese native consciousness that had spurred people to destroy his statue had nothing to do with them, either. Aborigines have an outsider’s stance regarding the ebb and flow of the island’s political rivalries. Regardless of who is in power, to the island’s aborigines Jade Mountain is marked with the footprints of their ancestors, a landmark evoking “home.” 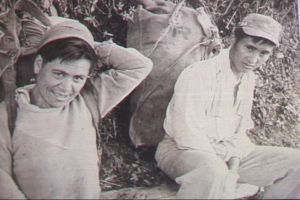 In the film, “Dear Rice Wine, You are Defeated”, a grandfather insists he does not trust the rice wine from the Taiwan Tobacco & Liquor Corporation. Suspecting contamination, he is afraid to drink it. Because the brewing process happens behind factory walls, the older generation is wary of rice wine produced by the TTLC. Grandpa knows that his people, the Pang-cah, brew many kinds of rice wine themselves. “Since it’s made by us,” he says, “you can see the people who make the yeast, and those who brew the alcohol, and see what ingredients they add…”

The idea that rice wine is harmful to your body takes on two levels of meaning in the film. One is that rice wine by its nature damages health, while the other is that specific ceremonial rituals stylizing its consumption can be harmful in themselves.

Many Pang-cah are convinced that one kind of rice wine is flawed and objectionable, while the second type of rice wine, produced within the community, is safe and acceptable. However, these two kinds of rice wine are now often confused, because people cannot distinguish them based on appearance. Members of the younger generation who have not been through the relevant tribal rites are especially unaware of the differences between the two.

Grandpa says, “You must finish all of the rice wine in that bowl.” In the tribe’s initiation ceremony, a member who drinks all of his rice wine is thus mature enough to shoulder larger responsibilities. The ceremony also represents resistance to the foreign rice wine because it underlines the differences between the vital tribal wine and —that other wine. The wine takes on ethnic significance, validating the spirit of the tribe and serving as a symbol of resistance to mainstream stigma and political repression. 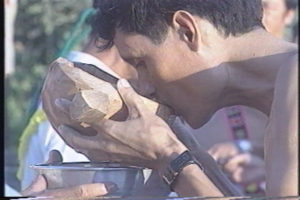 From this film, we can learn some of the motivating goals of Taiwan’s indigenous peoples’ movement: the return to ancestral tradition, and the protection of tribal soul. In addition, the movement attempts to break through the framework and stigma imposed upon aborigines by outsiders, in order to develop individual and tribal self-confidence, self-determination, and autonomy. Broadcast on television, or shown on a movie screen, these images of indigenous people returning to the tribe and one of its traditions (albeit one that is being interrogated by contemporary value-shifts ), can effectively be turned into political capital, serving as an energy to re-unite the tribe and propel it forward. They can also serve as a bridge of communication with outside social groups, the government, and the future.