The Making of Songs of Pasta’ay

This year’s Taiwan International Ethnographic Film Festival will show “Songs of Pasta’ay” together with Nobuto Miyamoto’s “Pas-taai — The Saisiyat Ceremony in 1936”, ingeniously bringing together two works that share the same topic, but were filmed 50 years apart.

Reviewing Taiwanese ethnographic film history, although the Japanese government produced several documentaries in Taiwan during the early years of its colonial rule, most of the films were merely propaganda glorifying Japan’s achievements. During the 1930’s, Nobuto Miyamoto, assistant to Taipei Imperial University’s Professor Utsurikawa, picked up a 16mm camera to try his hand at ethnographic filmmaking, producing two films about the island’s indigenous peoples. In 1934, he recorded his first movie, 500 meters of film about the Paiwan tribe’s five-year ceremony. Two years later, he filmed the Saisiat tribe’s Pasta’ay ceremony held in Daai Village. His skill as a filmmaker had markedly improved, as the image clarity and stability of his later film surpass the first. Miyamoto’s pioneering films were forgotten for several decades, but were thankfully rediscovered in the archives of National Taiwan University’s Department of Anthropology in 1994. In cooperation with The National Film Archives, the films were then digitized to preserve them for posterity. The first public showing of Miyamoto’s films during this year’s festival is an important event in the history of Taiwanese ethnographic film. 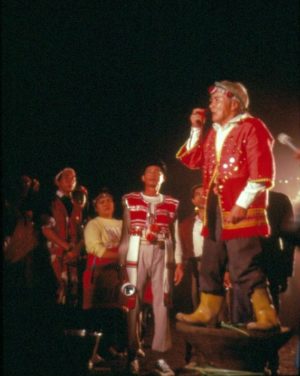 When I made these two documentaries, I had not yet seen Miyamoto’s films and did not consciously follow in his footsteps, but we had both coincidentally decided to cover the two very same tribal ceremonies. Both of our films chronicling the Paiwan tribe’s five-year ceremony were shot in Daai Village. When shown in succession, the two films reveal the changes that have occurred in this important ceremony over the 50 years that separate our recordings.

It has been 20 years since I filmed “Songs of Pasta’ay”. The date for the Saisiat Tribe’s Pasta’ay Grand Ceremony in 1986 coincidentally fell during the period I directed the Taiwan Indigenous People’s Ceremonial Song and Dance Research Project. I wanted to take the opportunity to record this important ceremony, which is held only once every 10 years (in the past it was normally was held once every two years). The Project’s coordinating researcher, Miss Cheng Yi-yi performed research and filmed at Shiantian Lake (the southern Saisiat ritual group or gaga), while I was in Daai Village (the northern gaga) working on a 16mm documentary film. I yearned to film a documentary with true simultaneous sound recording. After viewing my first documentary, “The Return of Gods and Ancestors”, celebrated cameraman Chang Chao-tang expressed interest in assisting with my next work. With the help of a friend, he got a hold of an obsolete CP16 synchronous camera from a television station. He held the camera himself, while Lee Daw-Ming performed the simultaneous recording using his second-hand Nagra synchronous sound recorder that could operate in coordination with the synchronous camera. He had just graduated from Temple University, where he had received professional cinematography and editing training. Aside from the subsidy we received from the Institute of Ethnology at Academia Sinica, we also applied for support from the Council for Cultural Affairs and the Kodak Company. From a total of 20,000 meters of rough cut film, we produced an hour-long documentary, “Songs of Pasta’ay”, equaling a filming ratio of ten to one.

Before filming began, I performed intensive research, coming across Lin Heng-li’s compelling article, ‘The Songs of the “Pas-Taai”,’ written in 1956. Two months before the Pasta’ay Grand Ceremony, the northern and southern gagas, or ritual groups, hold meetings where they practice the ceremonial songs. These songs are sung in a unique, repetitive way and it takes four to five hours to sing the complete series. Long sections of the songs are made up of function words, while there are about an equal amount of content words, which have meaning. While observing these practice sessions, I systematized the sequence of the verses, repetitive singing method, and functional words. Listening to the songs several times, I was better able to appreciate their strict structure, the alternating content and function words, and the beauty of the songs’ pitch variations. The more I listened and explored, the more captivating the songs of the Pasta’ay became. Could I somehow integrate the unique qualities of the songs with the images I filmed? How should I go about such a task?

Repetitive chanting that is so organized as in these ceremonial songs is quite rare. The repeated rounds of chants represent the incantations of the dwarf people (little people) and reflect the Saisiat people’s ambivalent feelings towards the dwarves. The songs that follow are like poems, separated into verses. Each verse has its own theme and uses a plant name to set the rhyme for the end of each line. Within the songs, there are some particularly important verses that must be sung at the correct time and according to specific rules. Ceremonial songs are separated into two kinds, primary and auxiliary, and the content and functional words play off each other in every song. These characteristics of the ceremonial songs assisted me in assembling and organizing the images in the film. I structured the film to mimic the form of the ceremonial songs as much as possible. Using my own hypothesis, I wanted to extend the complicated feelings that the Saisiat have towards the dwarves to the tribes’ ambivalent feelings about modern day outside influences, such as tourism and the government. Also, I hoped to show that the Saisiat were using the Pasta’ay to organize themselves and work towards alleviating the contemporary crisis facing their people.

Therefore, I arranged the scenes in “Songs of Pasta’ay” as follows:

1.The film is organized into 15 chapters, following the movements of the ceremonial songs themselves, as performed by the northern gaga. Chapter names are based on translations by Lin Heng-li. For example, “role” is the song of Urticaceae, “ayim” is the song of the patroller. Each chapter uses only part of that movement’s song serving to highlight the images in that portion of the film.

2.Just as the songs themselves contain a dichotomy of function and content words, my film is also made up of two parts representing the concrete and the abstract. Within each section, I employed two different methods to match up the songs and images. The concrete portion is comprised of songs with special significance that must be sung during certain portions of the ceremony. When these songs are played during the film, they are shown in sync with the actual ceremony as it is occurring. For example, “Role (the song of Urticaceae)” is sung when the northern and southern gaga meet on the riverbank. The ceremony is officially kicked off with “Raroal (song of invitation)”, which is sung in front of the ceremonial hut facing east to greet the dwarves. “Wawaon (song of the enemy)” is an extremely significant song that must be sung standing up at midnight on the second day, while “Bibilaiyan (song of the Hsiangshan tree)” is a light, spirited song sung on the third night. “Papaosa (the sending home song),” “Arebe, Kokoroy (the road home song),” and “Matano Sibok (song of waiting for the Hazelnut tree)” are all sung as a farewell to the dwarves. While these four songs play, the screen shows the images of the tribe sending away the dwarf spirits. A series of songs also sung on the three nights for the ceremonial dances are simpler than, and not as striking as, some of the other tunes. I, therefore, used them as background music during the abstract chapters of the film. As much as possible, I tried to follow the meaning of the lyrics to convey conceptual, mythical, reflective, reminiscent, and psychological topics. For example, “Kapabalay (song of Calamus)” plays when a young factory worker discusses his feelings about dreaming of the dwarves. When the officiator of the ceremony recounts the legend of the dwarves, “Bə’ə (song of the Arrow Bamboo)” plays in the background. “Ayim (song of the patroller)” is played when someone explains the origins of the handing over of the ceremonial flag. “Heyalo (the raincoat song) ” accompanies the scene where the rain touches off trepidation among the Saisiat. “Awuηə (song of the scarab beetle)” is used to reflect the Saisiat’s complicated feelings towards the pressure to make their ancient rite more attractive to tourists. The song of peril, or “əbəy (song of danger)”, represents their fear of the dwarves’ punishment. During one scene, “Kabtiroro” (the sunshine song) serves to contrast traditional and modern ideas and to describe the tribes’ current economic straits.

3.The interplay of the content and function words within the songs inspired me to contrast images and ideas on screen. The ceremony’s sequence served as the film’s axis, which was then interwoven with images of related tribal activities. Day scenes alternated with those at night and the visible Saisiat people obviously are portrayed differently than the invisible dwarves. Upon the dwarves’ arrival, the Saisiat are thankful and welcoming, but this is paired with caution and fear when they bid the dwarves farewell. These conflicting emotions recur throughout many of the verses. The entire film also employs intense color contrast and the camera intentionally accentuates the contrast between light and dark.

4.No voice over was used in the film in order to encourage the audience to watch the images and listen carefully to the natural sounds of the film. They can concentrate on the songs as they are sung or played in the background, and focus on the interviews without any distractions. Some portions have subtitled explanations, which are less invasive because the audience can decide whether to read them or not.

Some portions, however, did not come out as expected and the content and form were not ideally integrated. Also, not all viewers are able to understand or accept this kind of experiment. Audiences who previewed “Songs of Pasta’ay” were not accustomed to watching a film with no narration because they were used to being fed the filmmaker’s own interpretation. When a filmmaker foregoes authoritative narration, she gives viewers an opportunity to understand and interpret what they see on the screen on their own. In reality, the meaning of the Pasta’ay ceremony is too difficult to completely comprehend, so even I only have an elementary understanding. As I continue to learn and encounter more information, my own interpretations could also change. I hope by presenting these striking images of the Saisiat people in this way, I can provide myself and my audience with more room to imagine.

After the people of the northern gaga watched the film, many requested copies to commemorate the event. “Songs of Pasta’ay” was not only broadcast on Taiwanese TV, but was also shown at film festivals around the world. My Saisiat friends were very gratified that their culture was getting this kind of recognition. At first, some had been upset with the scenes that showed intoxication or tribe members speaking in the Hakka or Taiya languages, because they felt that these exposed some of the tribe’s flaws. However, others believed that, “We cannot fault the filmmaker for recording our shortcomings; instead, this should inspire us to do some soul searching.” It is an important achievement if an ethnographic film can provoke reflection and self-examination among the local aboriginal people featured. We will invite the Saisiat Tribe from Daai Village to attend this year’s screening of “Songs of Pasta’ay” and Mr. Miyamoto’s 1936 film in the hopes that viewing these works will encourage even more reflection. 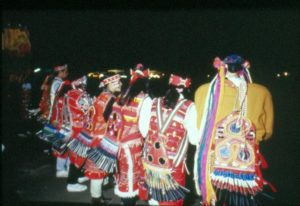