The Video in the Villages Project was initially animated by Vincent Carelli, the founder of the Center for Indigenous Advocacy in São Paulo, Brazil. The institute was founded for the purpose in the pursuit of fundamental rights for the native Brazilians. Since the emergence of video technologies in around 1987, Carelli kick-started the Video in the Villages Project, giving the indigenous peoples an opportunity to document issues crucial to themselves. Carelli believes they should have the right to register their image and culture on videotape, and thus deserving the full freedom to taking on the active role in the making of each production, and by immediate broadcasting the content to the village people. 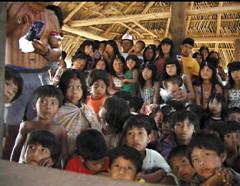 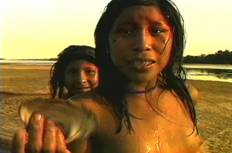 The project reached its first accomplishment by completing works such as Video in the Villages (Vincent Carelli, 1989), which narrates the first contact of media and four Amazon tribes, Nambiquara, Caviao, Tikuna, and Kaiapo, followed by their political appeals that are expressed by means of video recording, and a pursuit in ethnic recognition. The Spirit of TV (1990) documents the Brazilian Waiapi people’s reactions to the first encounter with the television and camera, and to seeing themselves as well as other Brazilian natives in the video, which gives them a sense of ethnic linking between each tribe. Meeting Ancestors (1993) documents the story Waiapi’s chiefman Wai-Wai’s interactions with Zo’e, a tribe who speaks a very similar language to theirs and had had no external encounters until recently.

Thanks to the promotion from film festivals and distributors, these works have been seen, recognized, and honored. Funds began to come in from foreign foundations and organizations. However, no funds have ever been offered by the Brazilian officials. While participating in film festivals all over the globe, Carelli has noticed the trends of indigenous media and its amazing growth – more and more aboriginals are learning to document their own society and culture with the camera. With a new public broadcasting law passed Brazil, the “Indian Program” was born in 1995, produced by Vincent Carelli and crew of Center for Indigenous Advocacy, authorized by the University of Mato Grosso in Brazil. The program was televised in national networks and had a conspicuous achievement in arousing echoes from the tribal areas all over the country. 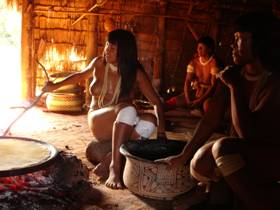 Owing to the past two decades of cultivation in media technology, Video in the Villages is now a prolific production who not only puts practical skills into pragmatic realizations, but creates a unique style and cultural significance in the sense of indigenous aesthetics. This year we are proud to introduce the respected Video in the Villages with a great focus in our central theme, inviting Karane Txicao, the co-director of From the Ikpeng Children to the World, one of the three works chosen to participate at this year’s festival, to attend the event at Taipei for a keen cultural exchange with the audience in Taiwan, and the local aboriginal filmmakers.